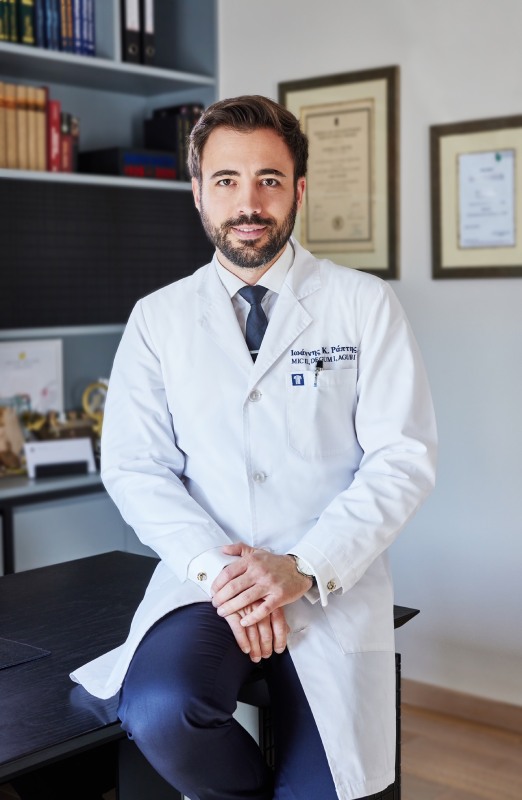 After graduating from the Medical School of the National and Kapodistrian University of Athens (grade "very good") and completing his military service he moved to Germany, where he specialized in obstetrics and gynecology.

During the last 6 years of his stay there he worked at the academic hospital Agaplesion Allgemeines Krankenhaus Hagen of Ruhr university in Bochum, where he received the title of Senior Consultant. The gynecology clinic is a perinatal center of first (maximum) grade, endometriosis center, cervical dysplasia-colposcopy center and breast center.

He received full training in Special Obstetrics und Perinatal Medicine and specialized in high-risk pregnancies and complicated childbirth. Having more than 900 births in his record he was awarded the DEGUM I title by the German Medical Ultrasound Society (DEGUM).

As the head surgeon of the endometriosis center he performed, among others, more than 500 laparoscopic procedures of the highest degree of difficulty, receiving the MIC II title from the German Society of Gynecological Endoscopy (AGE).

During his urogynecology specialization he was awarded the AGUB I title by the German Society of Urogynecology and Plastic Reconstruction of the Pelvic Floor (AGUB).

As the head physician of the cervical dysplasia and colposcopy center he specialized in the colposcopic diagnosis and treatment of precancerous lesions (HPV) and sexually transmitted diseases of the vulva, vagina and cervix.

At the "Frankfurt Hormonal School" he perfected and certified the applied assisted reproduction techniques with emphasis on personalized IVF therapy.

After his return to Greece and vying for a place at the forefront of surgical advances, Ioannis Raptis got a scholarship at the world-renowned "World Laparoscopy Hospital" of New Delhi, a city well-respected in the area of endosocopic surgery. There, he expanded and certified his knowledge and skills regarding robotic gynecologic surgery and the da Vinci Si and Xi robotic system

Since 2017 he lives and works in Athens and occasionally performs as a visitor senior surgeon endoscopic interventions in german hospitals, teaching new endoscopic techniques to colleagues and resident doctors. At the same time, he participates in conferences and seminars abroad for the constant updating of medical practice.